I’ve been lucky enough to get my hands on one of the Raspberry Pi alpha boards. I have various plans for things to try with it, but I thought I’d post some initial thoughts about the experience of using the board, and the project as a whole.

If you’ve not heard the name before, it’s a charity that aims to “promote the study of computer science and related topics, especially at school level, and to put the fun back into learning computing”. To this end, they’re developing a $25 computer. Not a toy, or a working model, but a real computer that’s cheap enough to give to kids without worrying about them breaking it. This isn’t just pie in the sky1, either: they’ve already produced two generations of prototype hardware, and should be on course to have the final version in production, at the target price2, before the end of the year.

The board, pictured below, has at it’s heart a Broadcom system-on-a-chip based around an ARM CPU, with 128MB or 256MB of RAM stacked on top. There’s very little else on the board - the slightly more expensive version has a single-chip USB hub and Ethernet adapter, but that’s pretty much it. This simplicity is how they’ve managed to hit the ambitious price point. 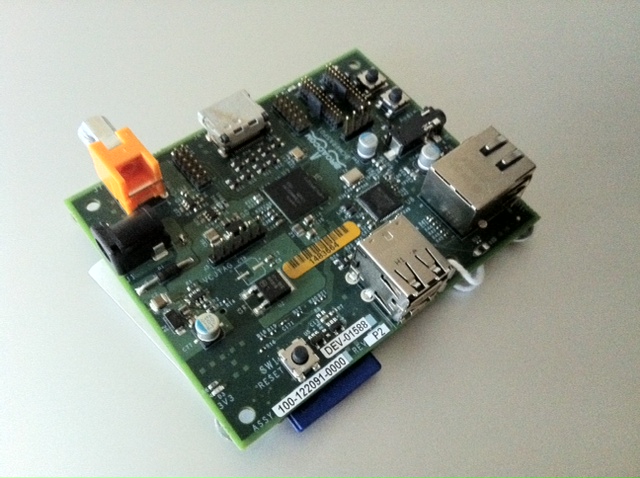 This kind of SoC is more often found in set-top boxes and the like, so it has reasonably good graphics and sound. It really is a complete system - you just plug a keyboard into the USB port, a TV (or monitor) into the HDMI, and you’re away.

On first booting the board, I was taken back. Not to primary school and the BBC Micro, but to my first exposure to Linux at University. The disk image I have boots to a console, and I found myself dredging up knowledge of things like runlevels and virtual consoles that I hadn’t used for years. My soft hands suitably re-calloused, I proceeded to poke around, install various packages (including, I admit, X Windows and LXDE), and generally having a play. The current OS image is based on Debian, and so hundreds of packages are only an apt-get away. The list isn’t as comprehensive as it is for x86, but there are still plenty of interesting packages (such as TightVNC) to install.

The thing that struck me as I used the Raspberry Pi was how familiar everything is. This isn’t some kind of esoteric embedded system, but a real computer, with a real OS, and standard languages and compilers right there, running on the board itself. Granted, it’ll never challenge the latest MacBook Pro in terms of raw horsepower, but for the intended use - programming education - it’s more than enough.

You could, of course, stick Firefox on the device, and get a dirt-cheap, tiny, low-power client for the web. There are also myriad things that become feasible when you can get a computer for the sort of money that Curry’s would charge for an HDMI cable not too long ago - smart screens, tiny servers, automation, and many others. You could even stick LibreOffice on it and equip a school computer lab for a fraction of the price today. However, doing so would miss the point.

The project stems in large part from the observation that fewer of the eighteen-year-olds arriving at Cambridge to read Computer Science had a good grasp off how computers actually work3. This is not, of course, to say that they’re any less bright, but just that their exposure to computers has been markedly different from that of those of use who grew up in the eighties (or even the nineties).

There are numerous factors behind this change, but a big one is the rise of the family computer. This is a device that has a myriad of uses - banking, shopping, gaming, watching TV - which means that parents are a lot less inclined to let an inquisitive seven-year-old poke around in it’s innards. A Commodore 64 or Acorn Electron, by contrast, was useful for… pretty much nothing, out of the box. Even getting a game to load involved reading the manual and getting some mysterious incantation just right.

This initial uselessness is not only part of the charm of early home computers, but also a key to their educational value. To make them do anything of interest, you had to program them at least a little, and this gave curiosity a way in. Even copy-typing listings from a magazine4 gives you the idea that, far from being some kind of magic, this box is something that could be understood if you put your mind to it.

Modern computers are increasingly black boxes, with a big implied or explicit “no user serviceable parts inside” notice discouraging people from wondering how they work. This is appropriate for tools that are increasingly central to our lives5, but raises the question of where the next generation of programmers and hardware engineers is going to come from. By providing a cheap, open machine that kids can tinker with to their heart’s content, Raspberry Pi are providing an answer. It’s not the complete solution, but it’s a big part of it. What they need now are software and ideas, and if you’re a programmer of teacher (or both) that’s something you can help with. You can also help by buying one of the final boards under their buy one, give one scheme. I’ll certainly be getting one or two.