In the light of the Raspberry Pi project’s attempt to reintroduce kids to the idea that a computer is something you program, I thought I’d share with you something from my own childhood. Specifically, a book: 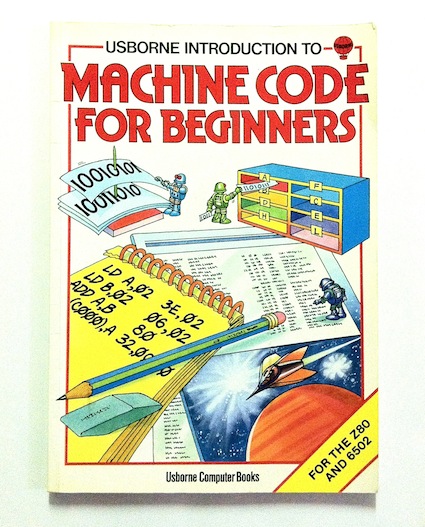 Unlike more modern children’s books, it doesn’t state a target age, but I believe it’s aimed at junior school children1. As you can see, it’s illustrated by with lots of little cartoon robots acting out the various operations that occur in a computer. And it teaches you machine code.

I can imagine some readers reaching for their pedantic hats. “This man is a fool,” they’re thinking, “who clearly doesn’t know what ‘machine code’ is. He obviously means ‘assembly language’.”

You see, in the mid-eighties, computers weren’t quite so impressively specced as they are today. Unless you had the Rolls Royce of home computers, the BBC Micro3, you wouldn’t have had the luxury of an assembler. You had a BASIC interpreter, and you considered yourself lucky. The book provides a listing for you to type in. This isn’t an assembler, of course: it’s just a program that allows you to type in bytes, in hex, to be poked into consecutive locations in memory. Once you’ve learnt hex on page 11, of course.

In 48 uncrowded, extensively illustrated pages, it goes from explaining things like binary and the difference between RAM and ROM, through addressing modes and registers, to writing real (if simple) machine code programs. In two different architectures, on half a dozen mutually incompatible computers. This is an impressive scope for such a slim book, made even more ambitious when you consider it’s aimed at children.

The important message is that this level of depth doesn’t scare kids off; instead, they lap it up (some of them, at least). By all means provide simpler material for those without the time, inclination or ability to tackle the complicated stuff. Just make sure you provide something challenging to keep the interest of those who can.