To buy one Apple product may be viewed as misfortune... 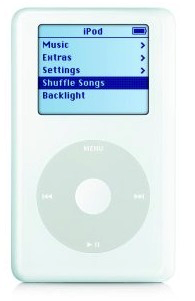 After a year or so of watching my bank balance move monotonically in one direction (the wrong one), I now have an income again. I celebrated this fact by splashing out on a 20GB fourth gen iPod. It arrived on Wednesday, and on the whole I've been impressed. The design of the thing is, of course, fantastic. Not only does the iPod itself seem to be getting neater and simpler with each generation (without sacrificing functionality), but all the little touches (like the fold-out packaging) cement the impression of a product into which real thought has been invested. I particularly like the power adaptor - it's just a transformer with a 6-pin FireWire port in it. As I said, simple.

The UI is equally clean, well designed and functional. That isn't to say there isn't room for improvement. As has been mentioned many times, the addition of the "Shuffle Songs" option is a bit of a red herring. It shuffles your entire library aside from audiobooks; sounds good, but you quickly realise it isn't actually what you want. I have a playlist which is all of the songs in my library, minus the ones that it doesn't make sense to shuffle. I've collected these tracks - things like the vocal skits on Eminem albums, or tracks from the end of albums that have twenty minutes of silence followed by a "secret" ditty - into a "Don't Shuffle" playlist, and made a smart playlist with the rule "playlist is not Don't Shuffle". Playing this list shuffled by songs is, of course, relatively easy, but it kind of makes the Shuffle Songs redundant. A more useful thing to put on the main menu would be the option for shuffling (by song, by album, or not at all), but while you can add certain things to the main menu, this isn't one of them. That said, this is purely a software issue, so it may well get fixed in a future update.

Another things that was added in the fourth generation (although I thing a software update will get the same effect on third generation models) is the ability to create and save several On-The-Go playlists. I've not really found much need for this yet, but I have been using one of the other new information input features, namely the ability to rate songs on the iPod. If something turns up that I've not heard in a while, I can quickly give it a rating with a few clicks. This rating then gets transferred back to iTunes next time I sync. The whole process allows you to rate the songs in your library without having to sit an go through them all at once, and should prove useful for smart playlists and Party Shuffle in iTunes.

One thing that Apple has cut back on with the latest generation of iPods is the included accessories; no longer do you get a case or inline remote. With the 20GB version, they've also left out the dock. This was presumably to get the cost down, which to me seems fair enough; you can still buy all of the accessories in question separately, and if you got them all it would bring the price up to more or less the same as the previous generation. The difference is, if you don't want, say, the case, you don't pay for it. This is a good thing, especially given the large and growing range of third-party iPod accessories available.

The only fly in the ointment so far happened this morning. The iPod spontaneously froze this morning. 49 seconds into "That's Not Me". It wouldn't respond to button clicks, so I reset it. It now seems fine, and plays the same song all the way through without complaint. Maybe it wasn't in a Beach Boys mood earlier. In any case, I don't think it's a big problem, unless of course it keep recurring, in which case I'll have to investigate further.

I've also signed up for a couple of music download services. The first is eMusic. This is a subscription-based service; the basic package is $9.99 (about six quid) per month/40 tracks. The nice thing about it is that the tracks are all non-DRM'd MP3s, which means you can do what you want with them - archive them, play them on Linux or your DVD player, transfer them to more or less any portable music player. The only drawback is that they have a relatively limited catalogue. Nevertheless, it's worth a try - especially as they have a free 100-track trial with no obligation.

I've also signed up for iTMS, but I'm not planning to get much from there, as the songs are DRM'd. Of course, it's technologically completely ineffective - the system used (FairPlay) was cracked within days (as it happens, by everyone's favorite Norwegian teenager, DVD Jon) - and so it only serves to hamper legitimate users who want to do something that lies outside the very narrow range of things that Apple deign to allow you. Of course, even without cracking the DRM, you can always burn the tracks to CD and then re-encode them, but this leads to a loss of quality, and in any case I object to having to jump through hoops in order to listen to music that I've paid for using the software and hardware of my choice.