This Little Finger On My Right

Having built my keyboard, the next step was to start using it. Naively, I expected the learning curve would be pretty small, as I’ve been using a split keyboard for decades, and (I thought) touch type with a reasonable approximation of proper technique. This did not turn out to be the case.

Using MonkeyType, which seems to be the typing tester of choice for r/MechanicalKeyboards, I get around 60wpm (words per minute) on both the Microsoft Sculpt and my MacBook’s built in keyboard without any particular effort. While this won’t win any prizes, it’s perfectly respectable and certainly fast enough that I don’t feel it’s holding me back.

When I first tried the Corne, I was lucky to hit 20wpm, and more worryingly the accuracy was rarely above 80%. I was expecting a little difference, but not this kind of gulf. On closer examination, I noticed a clue that both pointed towards the root cause, and lead me down a bit of a rabbit hole. When typing on the Corne, I kept inserting spurious semicolons.

To take a step back, the idea behind staggered ortholinear keyboards like the Corne is to minimise lateral finger movements. To this end, each column of keys has a dedicated finger. This corresponds well to to touch typing on a normal keyboard, which is why I thought the transition would be a simple matter of getting used to the different offsets. However, in my case there’s a complication. One of my fingers doesn’t entirely work.

Specifically, it’s the little finger on my right hand. While I can grip with it fine, I can’t extend it properly, or lift it off a flat table, as demonstrated in this entirely convincing video:

I first noticed this in my early twenties; I asked my GP about it, and they basically shrugged and said it was just one of those things. Given that it wasn’t particularly bothering me, I put it to the back of my mind.

The link to the semicolons is obvious; that’s the home key for that finger, and I was clearly resting the finger on the key with just enough pressure to occasionally activate it. Simple enough, but you’d expect that to happen on all keyboards, not just ortholinear ones.

Paying closer attention to my typing, I was surprised to see that I wasn’t following standard touch typing technique nearly as closely as I thought. My left hand was pretty well behaved, but my right darted all over the place. I instinctively held my little finger curled in to my palm, and my ring finger did double duty for the keys it would normally press (much like the index fingers do in the middle).

On the Corne I was consciously trying to type properly, resulting in the extra semicolons. Having discovered this, I could have just shrugged and adopted the same curled-finger technique, but that would dilute some of the benefits of the new layout. Instead, I wanted to try and do something to improve the situation.

To solve the resting problem, I took advantage of the hardware flexibility the DIY approach gives me. I removed the Gateron Ink Silent Black and replaced it with a Kailh Box Chinese Style Ancient Grey: 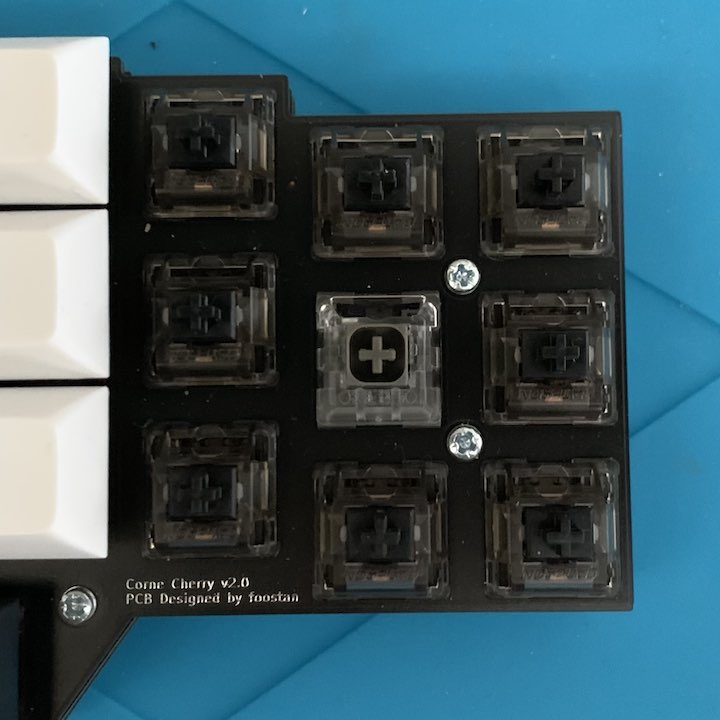 Both are linear switches (so no noticeable bump on the activation point), but the activation force of the Kailh is significantly higher than the Gateron (95g vs 60g). As hoped, this means that I don’t accidentally activate the key while resting on it, but can still press intentionally without issue.

The spurious semicolons were gone, which brought a big improvement in accuracy but only a mild one in speed. Some more mindful typing later, I figured out another, more subtle issue caused by my dicky finger. Because I can’t lift my finger on its own, I have to lift my entire hand to position that finger on another key. This, and the need to return the home position afterwards, has a significant impact on speed (and accuracy, if I’m not careful in getting back).

At this point, it occurred to me that I not only have flexibility in hardware, but in software too. I can put keys wherever I like. Specifically, if I move P down to the home row, I can type every letter without the gross hand movement.

Sure enough, with this change, both speed and accuracy immediately got far closer to acceptable levels. I still need a lot of practice to reach and then surpass those I get with a standard keyboard, but I can now see a clear path to get there.

This raises a dangerous question: why stop there? If I’m deviating from QWERTY, there are plenty of other layouts out there to pick from, most of which optimise for reducing finger motion. Workman even specifically cites “Reduced load on the right pinky compared to Dvorak and Colemak” as an advantage. Perhaps it’s time to see how deep the rabbit hole goes.